TORONTO, ONTARIO, July 31, 2019 – Plateau Energy Metals Inc. (“Plateau” or the “Company”) (TSX-V: PLU | OTCQB: PLUUF) reports that its subsidiary, Macusani Yellowcake S.A.C. (“Macusani”), has received resolutions from the Ministry of Energy and Mines (“MINEM”) in Peru regarding seven (7) of the 32 concessions currently under administrative procedure.  Receipt of the resolutions is the culmination of a nearly 12-month process to correct an administrative error made as a result of a government process relating to the timing of validity payments for 32 of its 149 mineral concessions in southern Peru. However, in terms of the resolutions received to date, the Mining Council within MINEM has denied the Company’s appeal to suspend the Institute of Geology, Mining and Metallurgy’s (“INGEMMET”) resolution recommending the cancellation of the validity of these seven (7) concessions by reason of ‘late receipt of annual concession payments’.

“We are extremely disappointed by the resolution of the Mining Council in this administrative process when the chronology of events and the facts clearly demonstrate the Company conducted itself professionally, acted in good faith and did everything in its power to react to a situation it didn’t control. We understand shareholder frustration at the long process to get to this outcome and have shared the facts below so that everyone may understand the background to this process,” stated Alex Holmes, CEO of Plateau. “The Company will consider and pursue all remedies at its disposal to protect the assets of its stakeholders, which includes the people of Peru and our surrounding host communities. We have the utmost confidence in our team and remain confident the rights of all, including foreign companies investing in Peru, will ultimately be upheld.”

The Company does not know when the remaining 25 concession resolutions will be issued to Macusani or their outcome, however we will act swiftly and accordingly once the resolutions have been issued to protect any of the affected concessions. A detailed background and chronology of events is included further in this news release.

The resolutions for the concessions received to date are concerning: 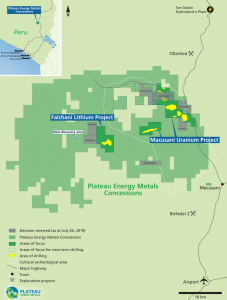 These seven (7) concessions represent approximately 3,900ha, or less than 4%, of the Company’s total 93,000ha concession package and approximately 10% of the Company’s 2015 uranium mineral resource estimates on an indicated and inferred (“I&I”) basis (refer to table 1). Of the seven (7) concessions, only Lincoln XXVI, represents approximately 13% of resource estimates (refer to table 1) that form part of the January 25, 2016, preliminary economic assessment (“PEA”) for the Macusani Uranium Project filed under the Company’s profile on SEDAR (www.sedar.com). The Company wishes to remind investors that a considerable amount of its resource base of uranium and lithium will not be impacted should the remaining 25 concessions in the administrative process result in the same outcome. The recent lithium surface discoveries at Tres Hermanas and Quelcaya are not located on any of the 32 concessions in the administrative process. 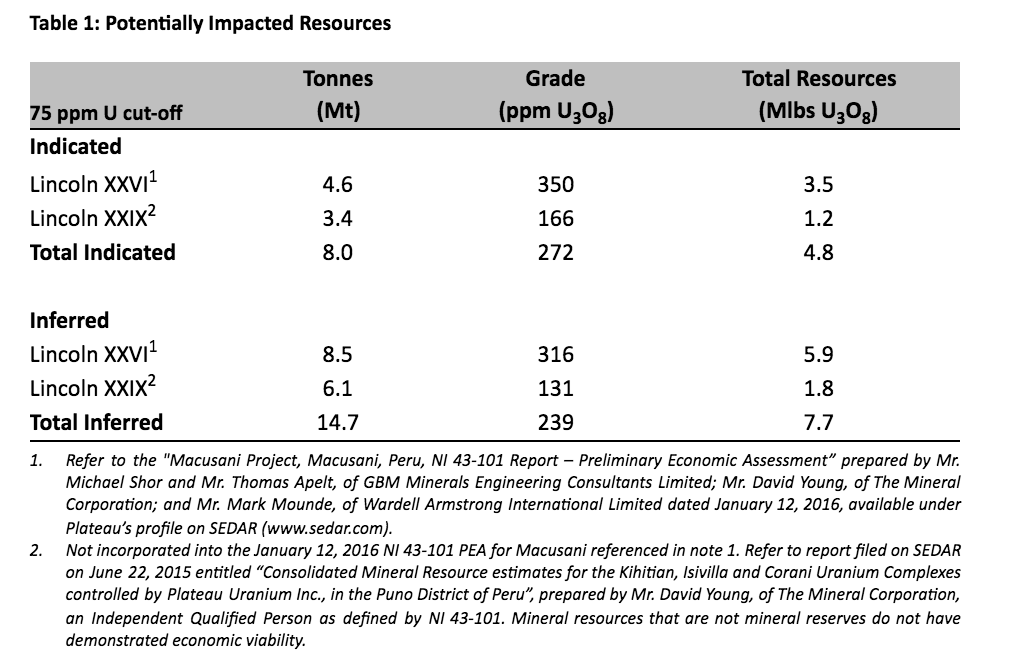 The Company will continue working towards completing the Falchani Lithium Project (“Falchani”) PEA, a significant milestone that will see Falchani go from discovery to PEA in less than two years owing to the hard work and talented team in Peru alongside the strong support of the communities we work with. The PEA will however be delayed pending the outcome of the administrative process as it relates to the remaining 25 concessions.

An administrative process was initiated as a result of resolutions issued by INGEMMET, firstly in October 2018 and more recently in February 2019 claiming that concession validity payments for 2017 and 2018 were late. The Company made concession validity payments for 2017 as soon as was practicable, shortly after it received a resolution from MINEM at 16:03 (all times Peru) on July 2, 2018, which confirmed the 32 concessions covering approximately 23,100ha should not in fact have a penalty (refer to below).  Validity payments for 2018 were made for all 149 concessions during April and May 2019, and were receipted by INGEMMET, including the 32 concessions involved in the administrative process (see here). These 32 concessions are not currently recorded in INGEMMET’S online database as being received as a result of the administrative process, however payments have been made and acknowledged (refer to below).

The following detailed chronology of events illustrates that the Company was held back by a slow process by MINEM acknowledging no penalties were due which is the cause of the payment timing. The Company has included supporting documentation for stakeholders’ information:

2017: MINEM hired International auditors to conduct an audit of mineral concession expenditures across the entire country, looking back to the early 2000’s.

December 2017: Audit determines that work commitments as of 2016 may not have met the minimum required. Penalty amount is not determined at this point in time.

February 2018: The cadastre of the Peruvian mining concessions (El Padron Minero) is finally released with delays, probably as a result of the audit, and it included penalties totalling US$2.7 million for concessions controlled by Macusani. The audit identified that there had been an underspend on work commitments on a number of concessions dating as far back as to the period prior to Macusani’s ownership of the concessions. The majority of the alleged underspend of work commitments arose under the control of the predecessors, but stay with the concession, and thus fall to the current holder, Macusani, to bear the cost to keep in good standing.

February-March 2018: Macusani identifies errors with the penalty calculations and communicates this to MINEM.

April-May 2018: MINEM review is completed which results in a finding of penalty amounts totalling approximately US$0.8 million. Macusani continued appealing the fact that the quantum of penalties was incorrectly calculated on all concessions, in particular for 32 concessions, where the Company had overspent.

June 25, 2018: An agreement in principle is finally reached with MINEM on 117 of 149 claims as to penalty amount and 32 claims are deemed non-penalty. The penalties were reduced in phases to approximately US$0.52 million.  The banking system of INGEMMET will not allow the payment of only the good standing fees at this point, without a) also paying the penalties first or b) presenting a resolution cancelling the penalties.

June 28, 2018: Macusani pays the reduced penalty of US$0.52 million plus validity fees for all but 32 concessions deemed non-penalty as agreed (recorded as received July 2, 2018). Macusani’s appeal to MINEM for “zero” penalty on the 32 concessions was successful after MINEM reviewed supporting expenditure records demonstrating that Macusani had in fact exceeded the required work commitments. MINEM agreed that Macusani had in fact overspent and consents to issue a non-penalty resolution (the “Non-penalty Resolution”) for the 32 concessions in question. While awaiting the execution of the Non-penalty Resolution, which formalizes for INGEMMET’s records that there are no penalties on the 32 concessions, the Company was not able to pay only the validity fees.

The recommendation of non-penalty status for the 32 concessions is made at MINEM internally (see recommendation dated June 28, 2018 as appendix to July 2, 2018 signed resolution below). The resolution was required from MINEM and electronic concession records updated to reflect the “zero” penalty status. The signed Non-penalty Resolution stating a “non-penalty clause” for the 32 concessions in questions was signed on July 2, 2018 and received by Macusani at 16:03 (see below).

Based on the timeline of events leading up to July 2, 2018, and guidance provided by external parties in-country, the Company had no reason to believe that when the facts were presented to the Mining Council during the subsequent administrative process, it would result in anything other than re-affirmation the concession payments were valid, not late, and an administrative error was the cause. The treasury of INGEMMET accepted the payments and received the funds for the validity fees and applicable penalties in the last day admissible on July 2, 2018. Peru’s “General Mining Law” does not stipulate a time/hourly limit for the payment of validity fees only the last day during which the payment must be provided to INGEMMET. The payment of the validity fees was made on July 2, 2018, in accordance with “General Mining Law”.

The fact that INGEMMET changed their opinion subsequently is simply a damaging decision with potentially serious implications towards the stability of future mining should any concessions be cancelled.

Due to the timing of the receipt of the resolutions and a national holiday taking place in Peru from July 27 to July 30, 2019, investigations were hindered gathering all the information necessary to provide a detailed and thorough response to our stakeholders.

The Company will provide further information and updates as and when it becomes available.  Readers are encouraged to visit the updated ‘FAQ’ page on the Company website at https://plateauenergymetals.com/faq/ and invites the submission of additional questions regarding this or any other subject, directly through the website or by email at IR@plateauenergymetals.com.

Mr. Ted O’Connor, P.Geo., a Director of Plateau, and a Qualified Person as defined by NI 43-101, has reviewed and approved the scientific and technical information contained in this news release.

Plateau Energy Metals Inc., a Canadian exploration and development company, is enabling the new energy paradigm through exploring and developing its Falchani lithium project and Macusani uranium project in southeastern Peru. The Company, with mineral concessions covering over 93,000 hectares (930 km2), controls all reported uranium mineral resources known in Peru and has significant and growing lithium mineral resources, all of which are situated near infrastructure.