TORONTO, ONTARIO, August  6, 2019 – Plateau Energy Metals Inc. (“Plateau” or the “Company”) (TSX-V: PLU | OTCQB: PLUUF) reports that its subsidiary, Macusani Yellowcake S.A.C. (“Macusani”), has received the last 25 administrative resolutions outlining that the Mining Council within the Ministry of Energy and Mines (“MINEM”) in Peru has dismissed the Company’s appeal to suspend the Institute of Geology, Mining and Metallurgy’s (“INGEMMET”) resolution recommending the cancellation of the validity of 32 the concessions by reason of ‘late receipt of annual concession payments’.

As announced on July 31, 2019, the Company had previously received administrative resolutions for seven of the 32 concessions under review to correct an error made as a result of a government process relating to the timing of payments for 32 of its 149 mineral concessions.  A full chronology and background of events is included in the news release from July 31, 2019.

“Whilst we are disappointed with these remaining resolutions, we remain optimistic that the ultimate outcome will be a reversal of these decisions. Peru is a nation built on investments, respect for laws and regulations, and economic development working in harmony with all stakeholders. We believe that ultimately, reason and common sense in this matter should prevail,” stated Alex Holmes, CEO. “We have two strong projects, even in the worst-case scenario as a potential impact on our current resources, should all avenues to resolve this wrong be exhausted.”

The 32 currently impacted concessions represent an aggregate of approximately 23,100 hectares (“ha”), or less than 25%, of the Company’s total 93,000 ha concession package and may have the following impact on each of Plateau’s projects:

Only one concession for the Falchani Lithium Project is amongst the 32 currently impacted concessions and forms part of the March 1, 2019, mineral resource estimates for the Falchani Lithium Project (“Falchani Resources”), filed under the Company’s profile on SEDAR at www.sedar.com.  As noted in the table below (see Table 1), approximately 81% of the contained LCE tonnes in indicated resources are unimpacted by the administrative procedure, and approximately 80% of the highest grade, lithium-rich tuff (LRT) zone, on an indicated basis, also unimpacted.  The one concession and its mineral resources that may impact the Falchani Resources is listed below (see Table 2).

The Company is in the process of modifying the PEA for the Falchani Lithium Project to exclude the currently impacted concession as an alternate mine plan.

The recent lithium surface discoveries at Tres Hermanas and Quelcaya are not located on any of the 32 concessions in the administrative process. 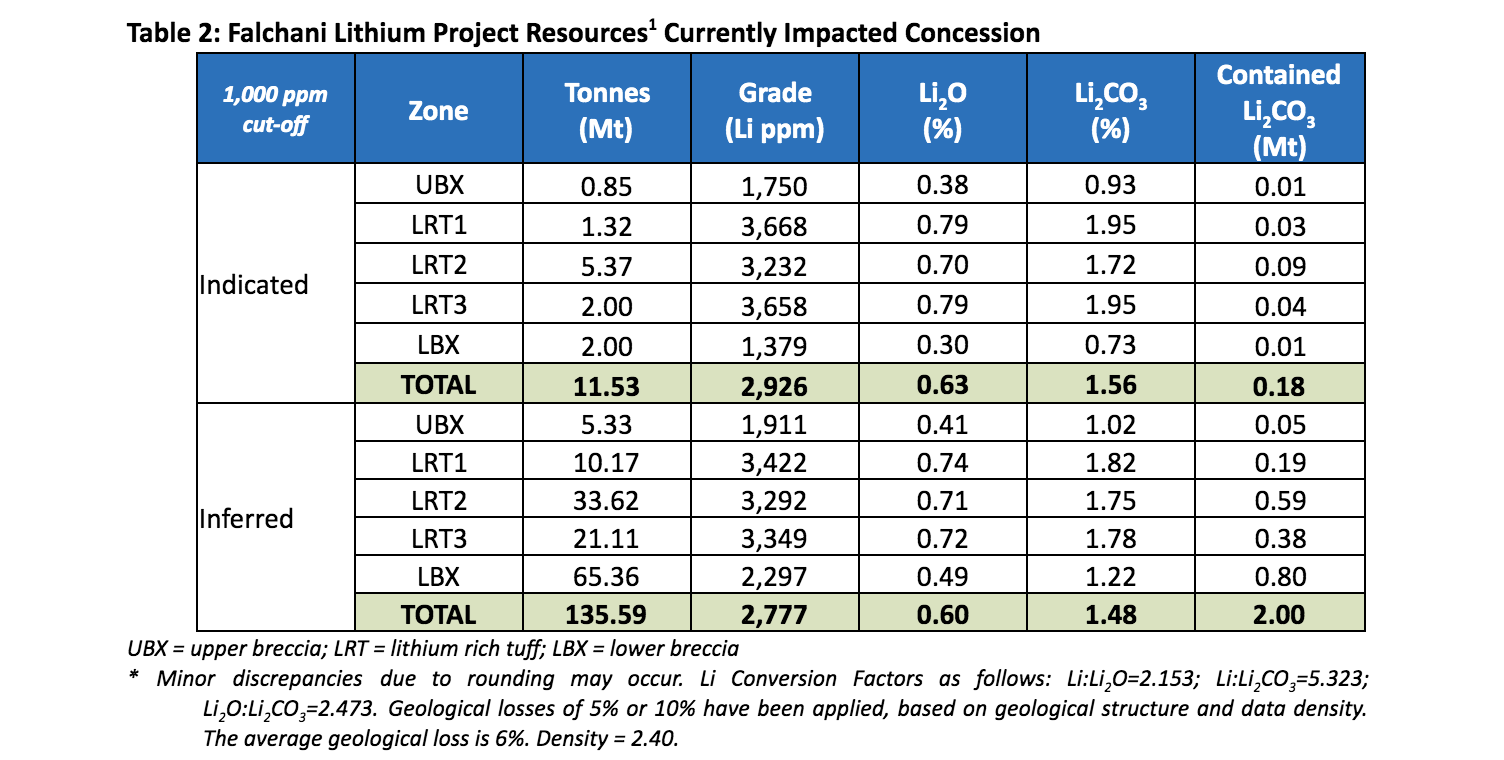 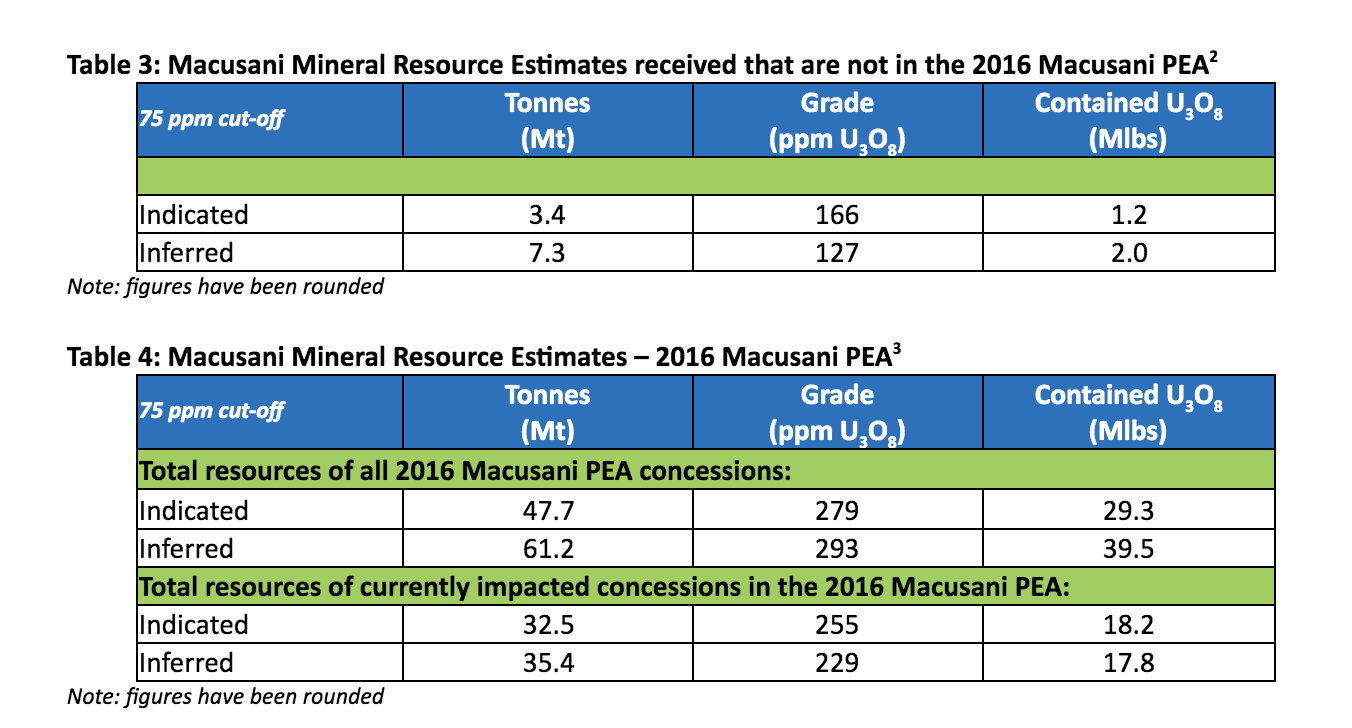 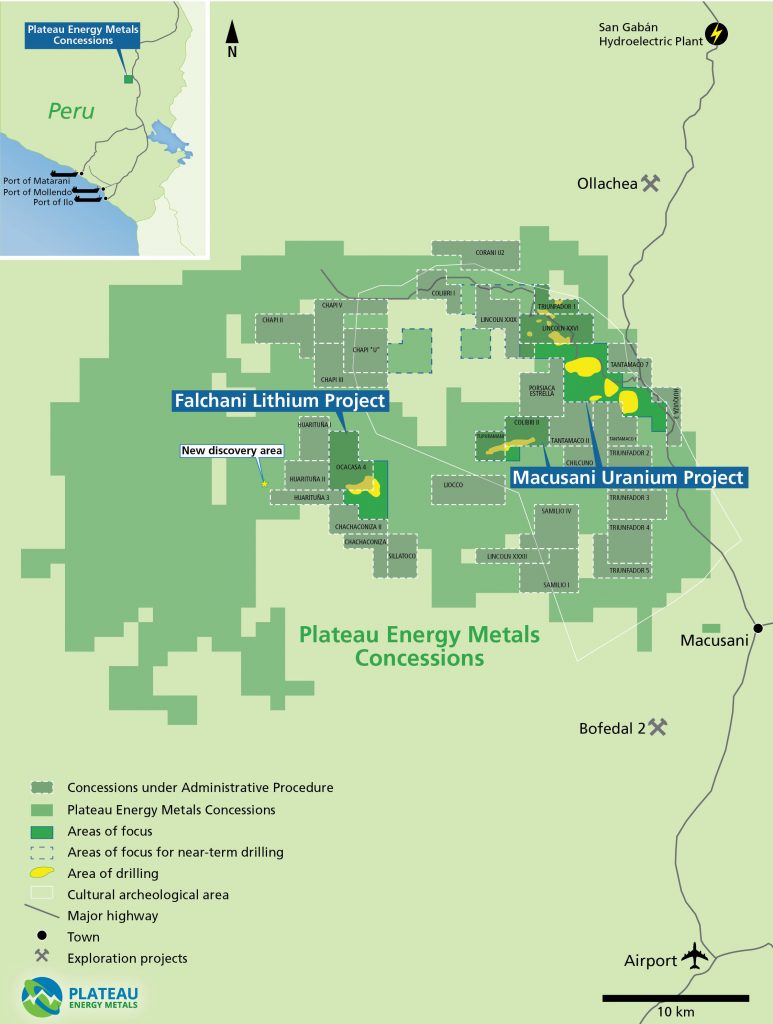 For more detail on the full background and chronology of events please see the news release from July 31, 2019.

Readers are encouraged to visit the ‘FAQ’ page and the Company invites the submission of additional questions regarding this or any other subject, directly through the website or by email at IR@plateauenergymetals.com.

Mr. Ted O’Connor, P.Geo., a Director of Plateau, and a Qualified Person as defined by NI 43-101, has reviewed and approved the scientific and technical information contained in this news release.

Plateau Energy Metals Inc., a Canadian exploration and development company, is enabling the new energy paradigm through exploring and developing its Falchani lithium project and Macusani uranium project in southeastern Peru. The Company, with mineral concessions covering over 93,000 hectares (930 km2), controls all reported uranium mineral resources known in Peru and has significant and growing lithium mineral resources, all of which are situated near infrastructure.

1. For further details on the Falchani resource estimates please review the technical report filed on SEDAR on April 18, 2019, entitled “Mineral Resource Estimates for the Falchani Lithium Project in the Puno District of Peru”, with an effective date of March 1, 2019, prepared by Mr. Stewart Nupen, of The Mineral Corporation, an Independent Qualified Person as defined by NI 43-101. Mineral resources that are not mineral reserves do not have demonstrated economic viability.

2. Refer to report filed on SEDAR on June 22, 2015 entitled “Consolidated Mineral Resource estimates for the Kihitian, Isivilla and Corani Uranium Complexes controlled by Plateau Uranium Inc., in the Puno District of Peru”, prepared by Mr. David Young, of The Mineral Corporation, an Independent Qualified Person as defined by NI 43-101. Mineral resources that are not mineral reserves do not have demonstrated economic viability.

3. Refer to the “Macusani Project, Macusani, Peru, NI 43-101 Report – Preliminary Economic Assessment” prepared by Mr. Michael Short and Mr. Thomas Apelt, of GBM Minerals Engineering Consultants Limited; Mr. David Young, of The Mineral Corporation; and Mr. Mark Mounde, of Wardell Armstrong International Limited dated January 12, 2016, available under Plateau’s profile on SEDAR (www.sedar.com).  The PEA includes inferred mineral resources that are considered too speculative geologically to have the economic considerations applied to them that would enable them to be categorized as mineral reserves. Mineral resources that are not mineral reserves do not have demonstrated economic viability