A copy of the updated PEA will be filed and available for viewing and download at www.sedar.com.

Ted O’Connor, CEO of Plateau Uranium, commented: “Completing the updated PEA is a very important milestone for Plateau Uranium. The new PEA results show the significant potential of the Macusani Plateau uranium district to become a future uranium production centre. Using a currently realistic, albeit conservative US$50/lb U3O8 future price, both the estimated NPV and IRR for the project are excellent.
The low cost potential of the Macusani Plateau uranium project, with estimated production costs similar to some of the best uranium operations in the Athabasca Basin and Kazakhstan, combined with significant estimated annual production levels, and estimated capital costs of less than US$300 million, near significant infrastructure in mining friendly Peru, all highlight the potential strategic nature of our project to supply the growing near-term uranium demand expected within the next 4 years.
The strong PEA results further validate the merits of the Company’s consolidation and organic growth strategy to control all defined uranium resources in Peru.
Our plan is to move the Macusani Plateau uranium project further along the path to development by progressing our environmental permitting strategy in Peru, initiating further delineation, expansion and exploration drilling, and following through with additional pre-feasibility metallurgical and engineering study work over the coming year. The work completed on the high-grade heap leach and tank leach scenarios has provided up-front, potentially economic options to consider in the future pre-feasibility work.
We are seeing signs that uranium demand is increasing as nuclear reactors are being built around the world, and economic supply has not increased. We believe that the uranium market is in the early stages of its inevitable long term recovery, and are positioning Plateau Uranium to be ready to capitalize on this anticipated recovery with an incredibly robust project.”

PEA Base Case Details
The updated PEA contemplates the construction of a conventional open pit mining operation with a centralized processing facility operating over a 10-year life with a throughput of approximately 30,000 tonnes per day (“tpd“). Heap leach processing is planned to be used to extract uranium into a weakly acidic aqueous leach solution with uranium recovery through exchange (“IX”) and a solvent extraction (“SX”) acid recovery circuit. 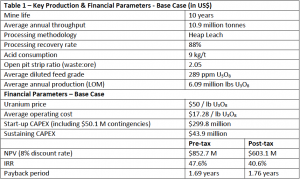 Mineral Resource and Inventory Details
The mineral resources to be extracted, optimization and scheduling work was completed by WAI of the UK. Economic cut-offs and mill head grade figures were determined using a $50/lb U3O8 selling price, LOM average mining cost of US$2.40/t (ore and waste), 5% mining dilution, 95% mining recovery and a 3% royalty. The recovered U3O8 figures have been determined using 88% processing recovery.
The mineral resources to be extracted were derived by considering the most potentially economic deposits from the updated NI 43-101 mineral resource estimates completed by The Mineral Corporation of South Africa (for details see Plateau Uranium announcement, May 6, 2015).

The consolidated mineral resource estimates, based on a 75 ppm U cut-off grade, are as follows:

The consolidated mineral resource estimates, based on a 200 ppm U cut-off grade, are as follows:

Only three of the five uranium deposit complexes with identified mineral resources included in the above mineral resource estimates have been used as potential mine feed in the PEA, leaving significant future upside to provide additional feed to an existing operation. The results of the base case mineral resources to be extracted by complex are as follows (Table 2; see also Plateau Uranium announcement, December 1, 2015):

The proposed mine plans include predominantly open pit mining with underground mining proposed for some of the deeper high grade portions of the Kihitian complex to be accessed from the pit bottom. The conventional open pit mine design will produce 30,000 tpd and will be augmented with additional feed from the underground mine design that will produce 2,700 tpd through room and pillar mining methods, extracted by a continuous miner and conveyors accessed from the pit bottom. The mining methods proposed would use industry standard mining fleet equipment and mining technologies that are used in practice around the world and in Peru.

Processing Details
The proposed method of recovery is based on the developed production schedule summarized above. The proposed method includes crushing and stacking mineralized material onto a heap leach pad, which is irrigated
with an acidic solution to dissolve the uranium. The leach solution would then pass through IX columns to recover the dissolved uranium and SX to recover uranium from the IX eluate to reduce acid consumption. The SX product solution then passes through precipitation to yield a yellowcake precipitate, which is thickened, filtered, dried and packaged for dispatch. Interpretation of metallurgical testwork results estimate sulphuric acid consumption at 9 kg/t and an estimated 88% processing recovery rate, resulting in an average estimated annual production of 6.09 Mlbs U₃O₈. The nominated process method utilizes industry standard equipment and extraction technologies that are used in practice around the world. 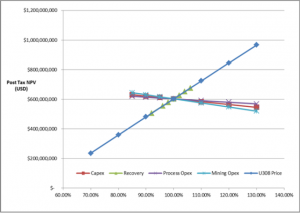 The project is most sensitive to both uranium price and recovery, and gives encouragement for future development since the base case has used a conservative US$50/lb unit price (see Table 4 – Base Case Uranium Price Sensitivity). The next most influential factor is the mining operating cost. To increase confidence in the rate used, further work needs to be completed in understanding the mining methodology and factors used. It should be noted that the open pit mining contract rate used in the financial model has been calculated in-house from first principles based on historical projects and a quote from the market is recommended for future PFS work. Major Peruvian mining contractors have been contacted and have substantiated the US$1.85/t (ore & waste) mining cost figures used in the financial analysis. There is opportunity to reduce the capital and
process operating expenditures, however the impact on project financials is limited. Similarly, the effect of capital cost estimate over-runs and higher operating costs is also limited.

As part of the 10.9 M tpa heap leach design GBM were requested to evaluate four additional scenarios. The estimates were conducted at a desktop level and based on the high-grade resource which used a 200 ppm U₃O₈ cut-off grade. The following four cases were investigated:

The tank leach option has been investigated due to the decreased plant footprint and the potential for increased uranium recoveries, with 93% process recovery used in the tank leach option cases. The same optimization parameters used in the base case were used for the high grade cases for the three complexes included in the PEA.
The high grade mineral resource scenarios are presented below for open pit only (Table 5) and open pit with underground option (Table 6). Mineral resources to be extracted in the following Tables are 44% Indicated and 56% Inferred (see Company announcement, December 1, 2015).

The open pit only high grade scenarios (Cases 1 & 3) have a higher strip ratio than the base case and would produce 25% less uranium over the planned 10 year LOM, however the mineral resource tonnage to be extracted, moved and processed represents only 50% of the base case and only 62% of the total ore and waste tonnes, yet yields a 50% increase in grade.

The addition of the proposed underground mineral resources to the high grade open pit scenarios (Cases 2 & 4) increases the average grade marginally, but increases the potential LOM average uranium production to over 5 Mlbs U3O8 per year.
Both high grade potential development scenarios above were considered as options within the current PEA update as feed for both the heap leach and tank leach processing options.
The capital and operating estimates produced as part of the high grade option analyses have utilized key inputs established as part of the base case project. However, where information was not available, historical and industry factors were used. The results of the option analyses are presented below in Tables 7 & 8.

It is evident in the financial analysis that the better options in either the heap leach or tank leach scenarios include processing of the high grade material from both open pit and underground (Cases 2 & 4). Similar to the base case, heap leach processing presently remains the more favourable financial option over tank leach processing, however, more work is required to rule this out at this stage.
The Company intends to continue along the development path by enhancing the present environmental monitoring program, and returning to active exploration/development work on the project with initial plans to restart drilling activities aimed at in-fill drilling on and between known deposits. This drilling would serve to further increase resource confidence and would also include initial drilling on several of the untested, shallow, high grade uranium showings on the extensive 910 km2 land position at the Macusani Plateau uranium project. The Company has an excellent long-standing relationship with the local communities near the project, with existing community agreements and environmental permits to allow the restart of exploration activity when needed. Excellent progress is also being made navigating Peru’s mine permitting regime and the path towards future uranium production.

Forward Looking Information
This news release includes certain forward-looking statements concerning the future performance of Plateau Uranium’s business, operations and financial performance and condition, as well as management’s objectives, strategies, beliefs and intentions, including statements with respect to estimated production, capital costs and mine life; the future price of uranium; the estimation and/or realization of Mineral Resources; the timing and amount of estimated future production; costs of production; success of exploration activities; and future demand for uranium. Forward-looking statements are frequently identified by such words as “would”, “may”, “will”, “plan”, “expect”, “anticipate”, “estimate”, “intend” and similar words referring to future events and results. Forward-looking statements are based on the current opinions and expectations of management. All forward-looking information is inherently uncertain and subject to a variety of assumptions, risks and uncertainties, including the speculative nature of mineral exploration and development, fluctuating commodity prices, competitive risks, general business, economic, competitive, political and social uncertainties and the availability of financing, as described in more detail in the Company’s recent securities filings available at www.sedar.com. Actual events or results may differ materially from those projected in the forward-looking statements and Plateau cautions against placing undue reliance thereon. Neither the Company nor their management assume any obligation to revise or update these forward-looking statements whether as a result of new information, future events or otherwise, except as required by law.